Cave Rizoupoli spreads beneath our feet

In my neighborhood Rizoupoli in Athens, near the church of the Prophet Elijah, a large cave of 2,500 m² is spreading under the urban agglomerations. It is one of the largest known caves in the region of Attica. Inside the cave traces of human presence from the 5th millennium BC have been identified. It is also believed that it was used as one of the hideouts of the bandit Davelis, in 1800´s.

Unfortunately, the cave has been severed damaged by the continuous building of the area in previous decades.The old entrance to the cave, situated on a fenced plot at Komanon street, is today sealed by the Greek Ministry of Culture. 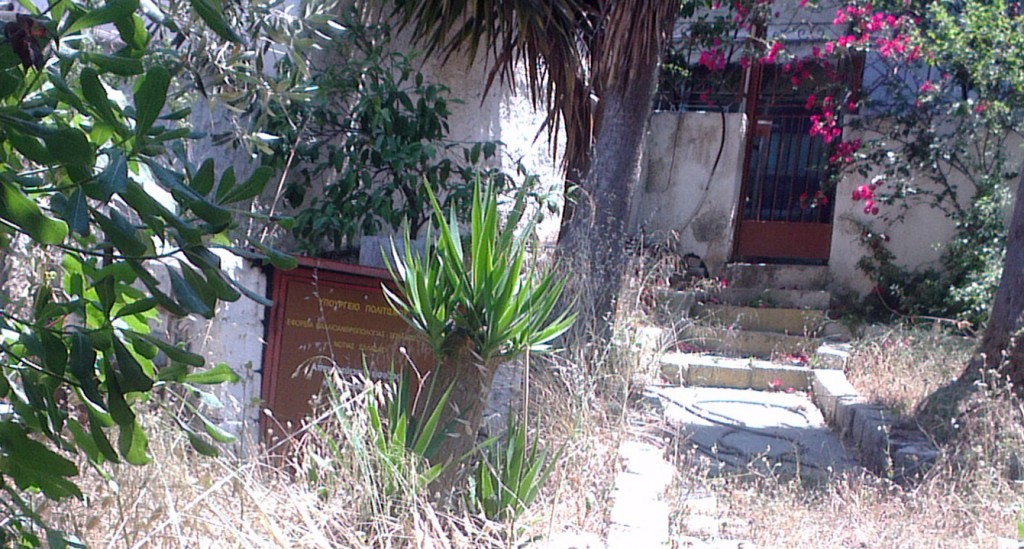 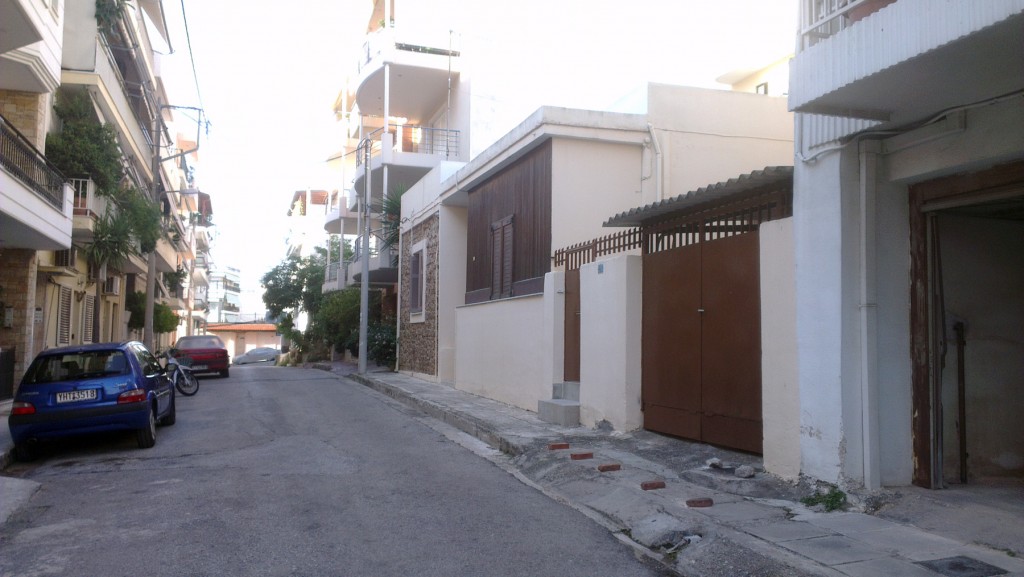 The cave was explored for the first time in by legendary Greek speleologist Anna Petrocheilou in 1960. She was descending through the old – and by now the only entrance left, and made a detailed mapping of the cave´s complex structure. 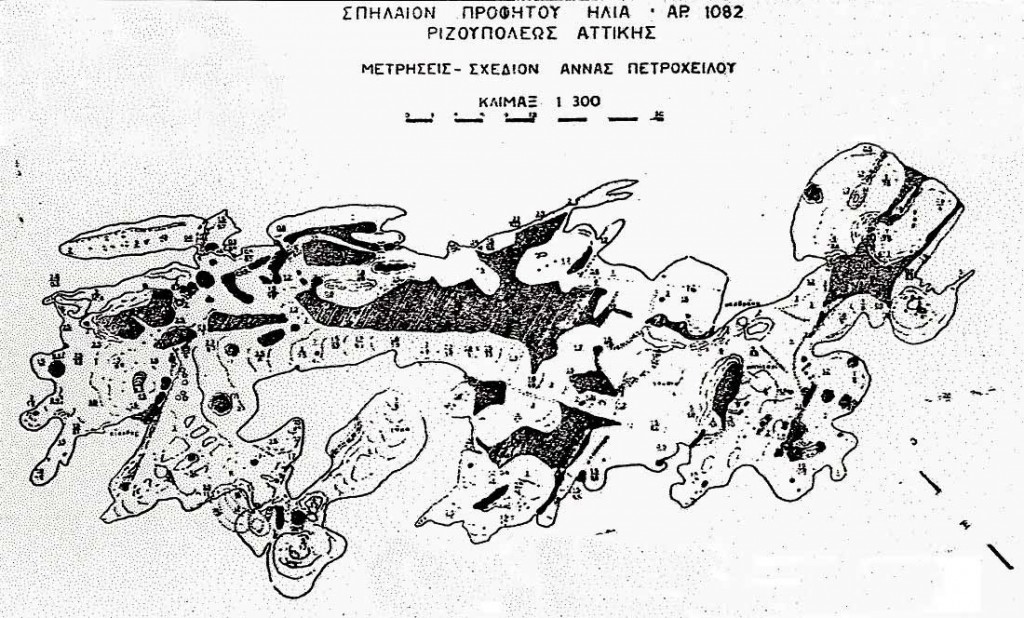 It is interesting to compare the area of the cave from map above with Google Earth surface map of Rizoupoli – below. Click on images to see details. 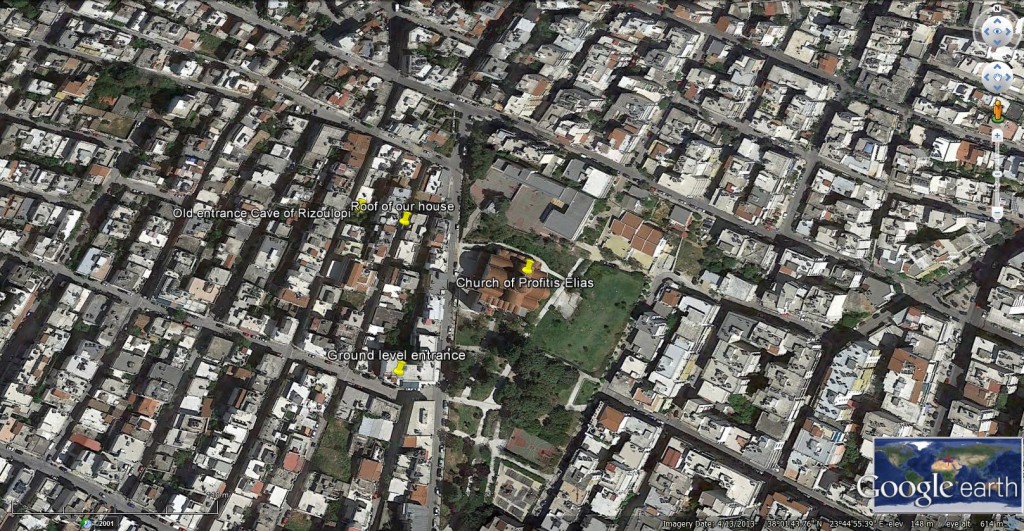 Surface area of Rizoupoli, above cave 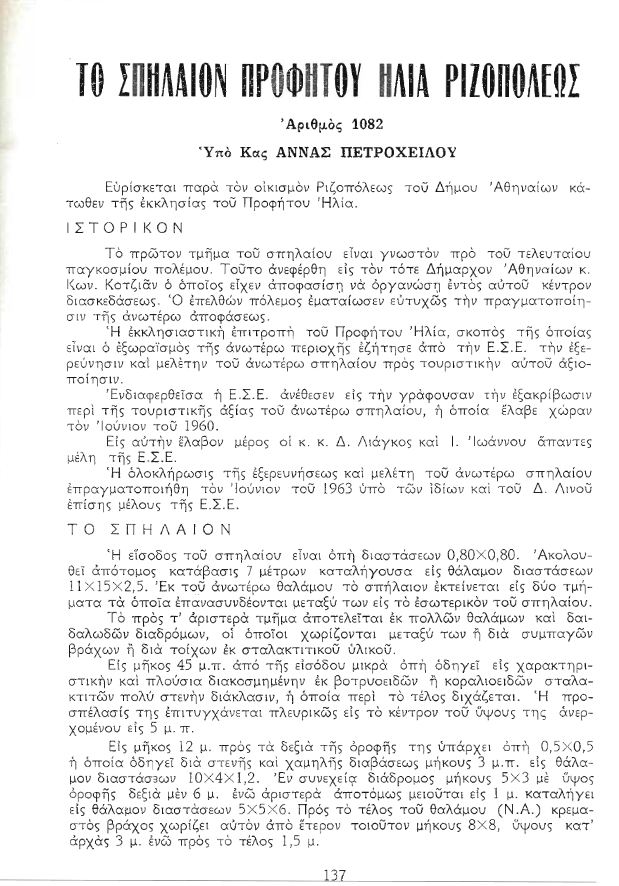 Anna Petrocheilou´s report of cave exploration from the 1960´s, page 11.

In her report, published by the Hellenic Speleological Society, Anna Petrocheilou describes in detail the chambers and corridors and other complexities of the cave, she writes about the spectacular stalagmites and stalactites, as well as the various archaeological and paleontological findings .

She writes further that the cave was known already in the 1930s and that the local authorities of that time wanted to turn it into a nightclub! For this reason they had already installed wide system of cables and lamps. The outbreak of the second world war foiled these grandiose plans (thankfully).

The entire report can be found as pdf-file here (in Greek).

An old and very rare video document showing Anna Petrocheilou´s explorations can be found at the Hellenic National AudioVisual Archive. Click on picture below will take you to the video, choose sequence nr 3, Duration: 00:01:59:12 – 00:04:02:00. 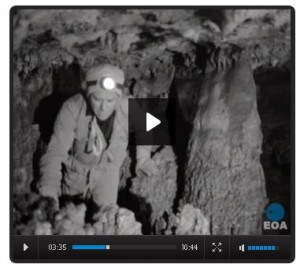 Video of exploration in the 1960´s.
Property of the Hellenic National AudioVisual Archive. 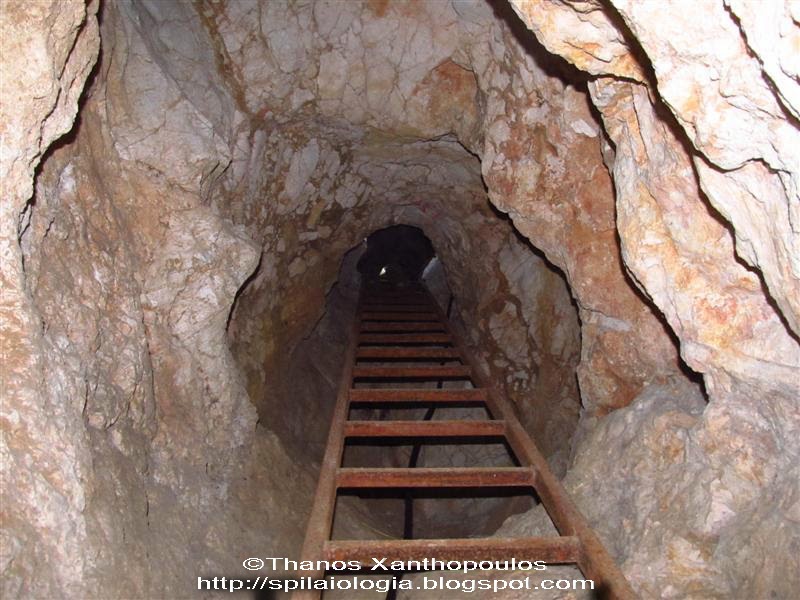 The first entrance discovered, an eight meter deep vertical hole in the ground.

The pictures above and below are from the excellent blog of Greek speleologist Athanasios Xanthopoulos. He was exploring the cave recently and documented it with rich photographic material. 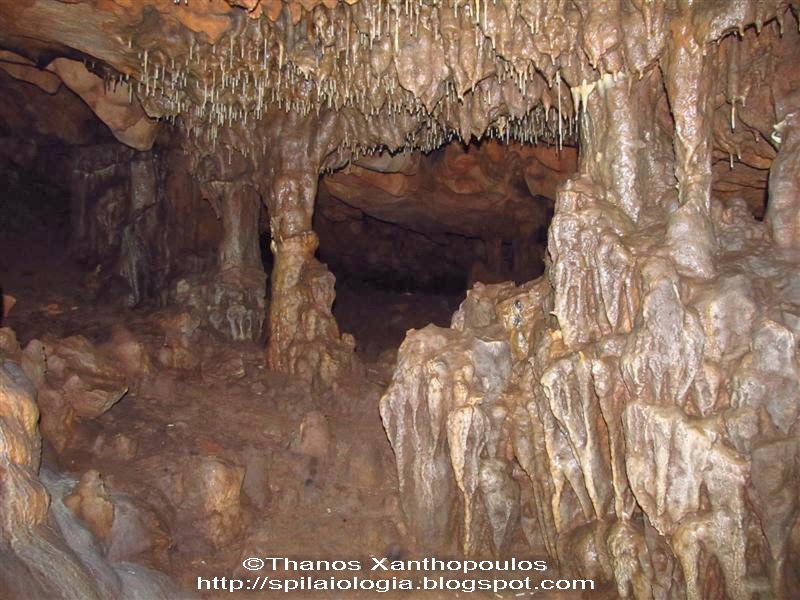 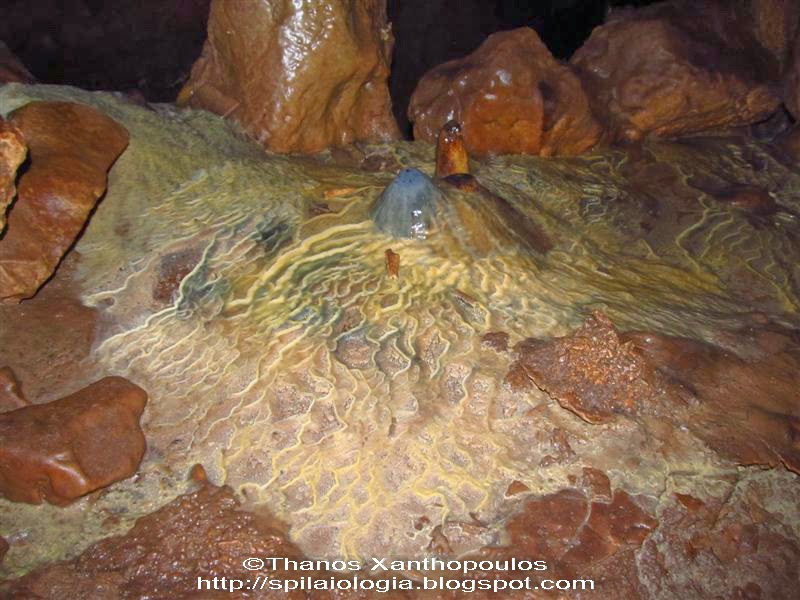 Beautiful but filthy water reflections, from the sewers that has been dripping in the cave for decades.

In the 1970´s, a new ground level entrance was discovered in conjunction with the building of a huge house complex. Despite the recommendations of the scientists, permission to continue the building was granted by the authorities. 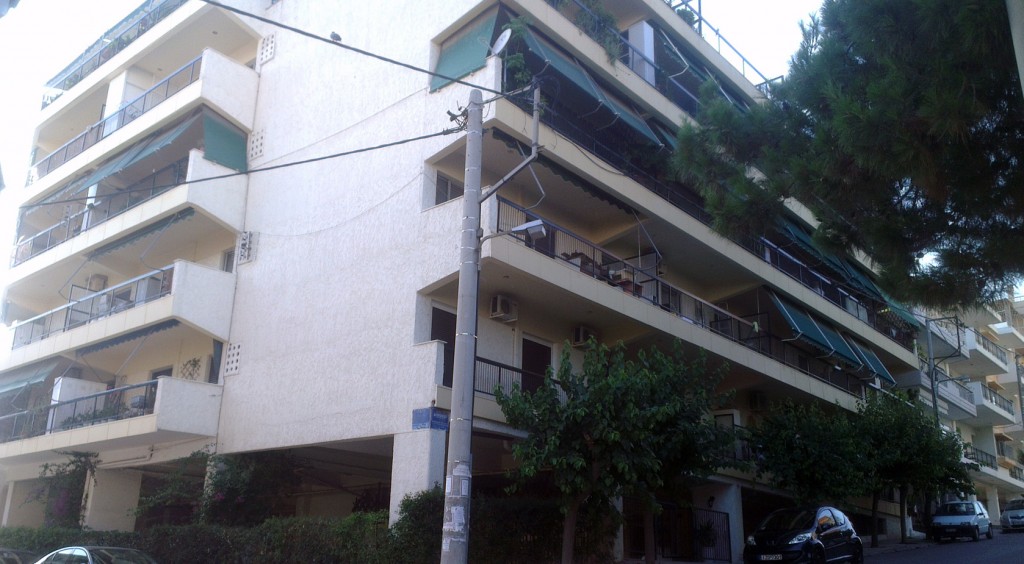 Ground level entrance discovered in the 1980s, but were build upon

Before the destruction was completed, the entrance was open  to the public a few days. The result was that almost all residents in the area entered the cave, and cut off small souvenirs to keep as decoration in their homes. 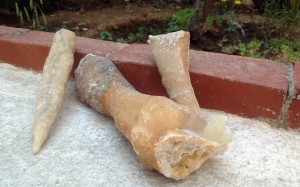 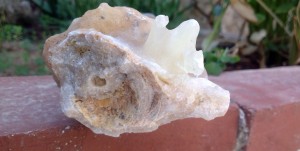 Further explorations of the cave has recently been made, with special permissions from the Ministry of Culture. Except the above already stated, you can find rich and excellent photographic material of the cave posted by the Hellenic Urban Exploration & Speleology. Below, some pictures from their blog: http://urbanspeleology.blogspot.gr 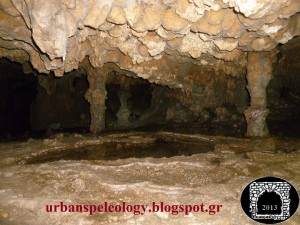 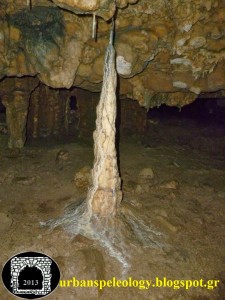 We who grew up in this area and as a children played at the cave’s entrance, always dreamed of sometime be able to descend into the mysterious chambers of this crystal palace. Unfortunately, no such future possibilities seems to exist. There are no plans for remediation and restoration. The cave is sealed, largely destroyed and almost completely forgotten. But it will continue to live it’s own life with slow constant changes, as it has done for millions of years now, remembered occasionally only by a few nostalgics.

This site uses Akismet to reduce spam. Learn how your comment data is processed.